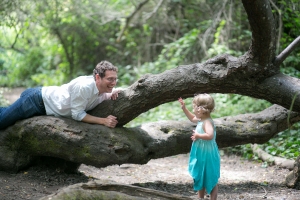 David holds a Ph.D. in Special Education from University of California, Berkeley. In addition to his private practice, he serves as the Director of Inclusion at Jewish LearningWorks (formerly the Bureau of Jewish Education) in San Francisco, and as a senior play and social development coach for JumpStart: Learning to Learn, an organization that provides education for parents of newly diagnosed children on the autism spectrum. He has also worked as a professional actor, teaching and performing at theatres throughout the San Francisco Bay Area. He developed and conducted research on Integrated Drama Groups, a drama-based adaptation of Pamela Wolfberg’s Integrated Play Groups model. He contributed a chapter to Charles Schaefer’s book Play Therapy for Preschool Children, and has spoken at numerous local and national conferences on the topic of supporting social development through play and drama.

He lives in Berkeley with his wife and their two daughters, who he likes a whole lot. He also likes ice cream.